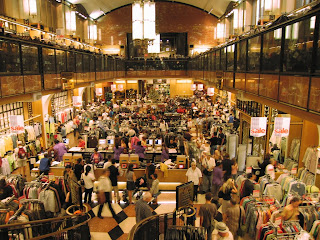 I said that I was not participating in Black Friday shopping madness.  But...I lied.  I didn't intentionally lie. I had not planned on shopping at all.  I just happened to be online Friday morning making lunch plans with a friend and discovered two items at JCPenney that I just had to get because they were so dang cheap.

One was a cooks Non-stick Electric Griddle for My Friend.  You see, My Friend is a cook in a restaurant so he is used to cooking on a big, flat grill.  When he cooks at my place, using a frying pan is completely foreign to him.  We talked about getting one of these griddles at WalMart when we were out shopping one day, but decided not to spend the money right then.  When I saw the griddle in the Penney's ad for $12.88 (with $10.00 mail-in rebate), I couldn't pass it up.  Even if it's a piece of crap that doesn't work, it's only $12.88 out the window.

I also picked up the cooks 5-in-1 Power Blender w/attachment.  It's a knock off of the Magic Bullet that is all over tv.  I'm not one to buy into infomercial products*, but I've always wanted one of these.  It, too, was only $12.88 (with $10.00 mail-in rebate) and couldn't be passed up.

I didn't spend any time looking around the store, however. I went it, checked the lines to see if they were too long, grabbed what I wanted, hopped in line, and got out of there.  It wasn't bad although there was a little girl who had lost her family (or vice versa) and I felt so bad for her.  She was crying and so sad. It broke my heart.

I have to add that my Friday experience was not nearly as bad as my excursion to Target on Saturday.  Crazy!  I wasn't even there to do holiday shopping. I only went in because I am trying to unpack more boxes (that I've ignored for months) and organize my computer room and I needed some storage bins/organizing thingies.  What a zoo!  I didn't stand in line too long, but the aisle ways were overly crowded and there were crying, tantrum-having children everywhere. Never again.

*Ok, ok. I promise to stop fibbing. I've been wanting one of those GT Express 101 thing-a-majiggers too.
Posted by Jessica at 10:24 AM