This past week was the county fair in the Town Left Behind.  I usually work the fair booth for my employer and help my mom with some catering events on the fair grounds.  I always have anxiety about who I will run into.

The first night I worked, My Friend sat with me at the fair booth. I was a bit anxious.  I don’t like people in that town knowing my business. I try to steer clear of all personal aspects of my life when I’m there.

The night went by rather seamlessly.  It rained. A lot. So there were very few people in attendance. Having My Friend there made the time pass quickly and actually helped me forget my apprehension.

My second fair shift was scheduled for Saturday morning.  I like the morning shift. It was pretty slow, as anticipated, until around noon.

My shift ended at 1 o’clock.  I was to call my mom then to see what she needed my help with and when and where I should be meeting her.  She asked me if Nellie (the Boy Left Behind’s daughter) would be helping us.  I was supposed to figure this out prior to now, but decided I didn’t feel like dealing with the Boy Left Behind after an antagonistic comment he made in the last text I had received from him a few weeks prior.  I told my mom this and she was fine with it.  I hung up the phone, turned the corner and headed toward the front gate to my car.  Lo and behold, I run into Nellie, the Boy Left Behind and his second child’s mother. (Seriously, I want to refer to her as “the baby momma,” but I know in my head that it’s not appropriate.  She’s young and unsuspecting and I feel in my heart that she will, one day, figure out that he has nothing to offer her.  But anyway…)

It’s been over two years now since the Boy Left Behind and I parted ways.  I’ve been dreading this moment for two years.  I have played out numerous scenarios in my head, the things I would say, the way I would feel.  None of that ever came to fruition.  My heart never even skipped a beat!

I walked right up (there was really no avoiding each other), gave Nellie a big hug and said that my mom and I were just talking about her. I asked if she wanted to help us back stage at the Josh Turner concert and she squealed.  Duh!  Silly me!  Of course, her dad had to play hard ball with the we’ll see act. Whatever. 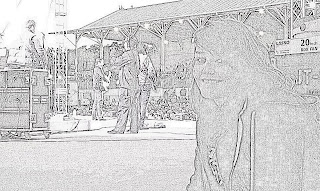 (Nellie backstage, yo.)
I had full intentions of introducing myself to his baby momma (Oops. Dang it!), but she wouldn’t even look my direction.  The Boy Left Behind pleaded with me with his eyes to let him be on his way so I made sure to chat it up with Nellie a little bit longer.  (It’s evil of me, I know.)  I gave Nellie one last big hug and went on my way.

I was surprised, as I was walking away and in the moments shortly after the encounter, that my mind did not run off racing with millions of thoughts.  I wasn’t obsessing about any of it.  It took a second for all that to sink in and, then, I gave myself a big ole pat on the back.  I survived.  It was a heck of a lot easier (for me) than I had ever imagined it would be.

I’m healing (sort of).  I’m stronger than ever before (for sure).  I survived.