Even though I complain about many aspects of my job, one of the perks, thanks to our union contract, is the excessive amount of time we get off around Christmas and New Years.  Technically, its two days for Christmas (plus Christmas Eve and Christmas Day) and three days for New Year’s (plus New Year’s Eve and New Year’s day).  So it ends up being a good week and a half of paid time off away from work.
I had great plans for my time off this year.  Lots of cleaning and meeting up with people I hardly ever get to see.  All plans were squashed, though, when I came down with a sore throat turned serious sinus crap the day after Christmas.  I laid on the couch for a whole week canceling plans and additional Christmas gatherings.  It sucked.  I was most disappointed, though, about having to cancel on my best girl in the whole world Nellie.
Nellie is The Boy Left Behind’s fifteen year old daughter.  Nellie has been part of my life (and I hers) since she was a year and a half old.  I love that girl as if she were my own child.  I’ve spent a good deal of the last 14 years helping to raise her. I feel like I have gone through much of what most parents’ experience.  I’ve changed diapers, made bottles, gave baths, dressed, chased, disciplined, got up in the middle of the night, kissed boo-boos, hugged out hurt feelings and broken hearts, stayed up all night and held her hair back while she threw up, stayed home with her when she was sick, took her to school when she missed the bus, took her to the emergency room, doctor visits, gone to soccer, basketball and volleyball games, dance recitals, had heart to hearts and sex and period talks, played, laughed and cried.  All the things that parents do.  So, when The Boy Left Behind and I broke up, my heart ached for what it may mean for my relationship with Nellie.
It’s taken some time, but I had no doubt that I would be able to see Nellie. If nothing else, I give some credit to The Boy Left Behind because he knows that I love her and am good to her and he would never keep me from her.  Nellie and I have text a lot and, in the Fall, I was able to go to a volleyball game.  Over my holiday break, we were planning for her to come and stay the night, but I got sick and all of our plans were squashed.  However, this past weekend, I was able to make arrangements with The Boy Left Behind and I picked her up on Saturday.  We had a GREAT time together.  We were able to talk, be silly, laugh and we spent a lot of time crying.  I miss that so much.  Nellie even got her first pedicure ever.  It was hilarious because she’s extremely ticklish and the pedicurist was quite the comedian. 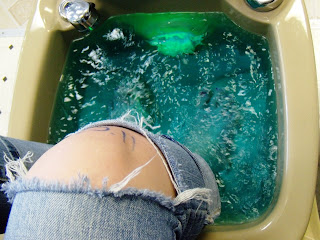 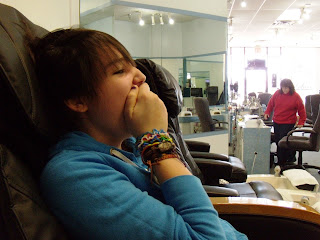 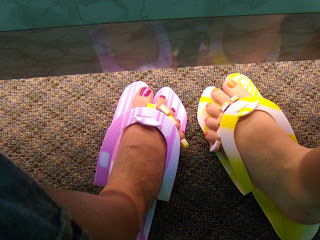 Nellie is having a rough go of things right now.  She and her mom argue and fight a lot.  My understanding is that that is somewhat normal for a girl her age and it happens in a lot of households, but I have nothing to base this on because my mom was an absent alcoholic at this time in my life so I was pretty much on my own.  Nellie also struggles with everything surrounding her dad and his girlfriend having a baby and some issues that go way, way back.  I feel so helpless.  I just want to be able to take her away and make it all better, but I can’t.  The best I can do is be there for her, try to help her through it, and offer the best guidance I can while still allowing her to make decisions for herself.  The amazing thing about all of this is that she shows such emotional maturity about so many things. She’s definitely more emotionally intelligent than I was at even 25 in some respects.  It’s just so sad to watch and know that there is absolutely nothing I can do.  But I also know that my struggles in life made me who I am and, possibly, a better person.  I just pray that she becomes a better person for all of her struggles and doesn’t, at some point, get lost trying find sanity, safety, security and love in all the wrong places.
Since Nellie's birthday is in December, I got her a little something too.  I'm glad I did because she later told me how she cried when her dad and I broke up because she was afraid she'd never see me again.  The engraving on this necklace is often called The Adoption Poem, but I felt it suited our relationship perfectly. 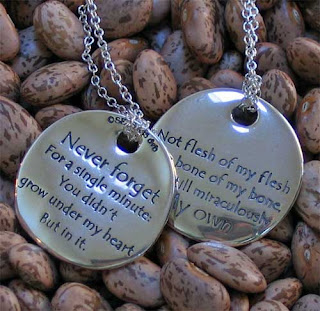 I just can't help myself. I love that kid!
Posted by Jessica at 6:09 PM