And the craziness continues

Yeah, that's right. At some point in my life, I wished for something other than boredom.  Guess what folks. Be careful what you wish for...

Since moving a year and a half ago, life has picked up and it hasn't slowed down. Work is busier than ever (and crazy too).  As a general rule, I work overtime and on Saturday's during the summer for another department. Usually, once the busy season is over, things slow down.  Well, I'm still waiting for that to happen and the busy season was over three months ago.

Holidays have never been my favorite time of year. Past holidays, for me, have been plagued with disappointments and heart ache.  I'm trying to remind myself that I've let the past go and I'm moving forward with a better attitude and better insight on how I put myself in situations to be let down.  Sadly, I think this has had an affect on two things:
1) I'm numb to feeling things.  I've taken on that "I just don't care" attitude.
2) I avoid things that will make me feel.

Case in point - My sister and I haven't spoken in almost two years. (For the first six months, I didn't realize she was avoiding me.)  When first learning that she had this issue with me and/or my life, I really just didn't care.  That hurt her feelings. My responses to her were uncaring and, probably, unkind.  Recently, I fueled the fire by, apparently, sending a non-touchy-feely birthday e-mail which sparked more anger/hurt from her.  Her response, I thought, was immature.  When I responded to it saying so, she left me this long dramatic voicemail.  My response, I REALLY DON'T CARE.  She says she's offered to get together and discuss the issue. Me, I'm thinking, nah. Let's not. I'm not up for a sit down and let's cry our eyes out together. I'm not changing my mind. She's not changing hers. I'm not going to stress out and get all emotional over someone else's disapproval or opinion over what I do with my life. Even if it is my sister.  I really just don't feel like I have any emotion to give to this situation or any other situation in life.  I honestly feel like my emotions are tapped out for life.

This is just one example. I have more. My point is, I'm beginning to feel like I've done a complete 180 and have gone to the extreme opposite end of the codependent spectrum in regard to my emotions.  That can't be good!

In more exciting news, I became a cat owner.  I cant' believe it. I never wanted an animal.  Too much work.  (If you know me, you know that I don't like to put too much effort into a whole lot.)  It was a con-job this whole cat thing.  But whatever. She's effin cute and I can't help that I've become obsessed with taking pictures of a cat.  I hate that.  I hate when people become obsessed with their animals or kids. (I know. That isn't nice, but some people forget themselves when they have kids. Just sayin.  <--See, I have complete disregard for people's feelings these days too. That's so not me.)  Anyway, pics of the kitty cat Bali: 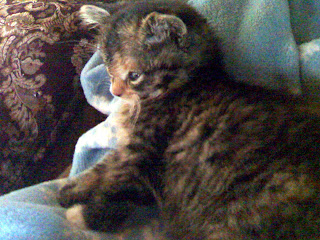 This is when we first brought her home. She was so tiny and sweet. 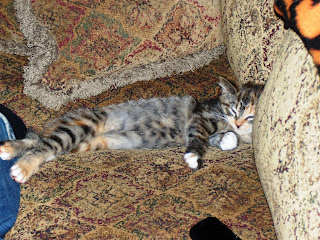 She spends a lot of time sleeping in weird positions like this.
And just an example of how I can't keep up with the crazy little psycho.
Did I mention that she likes to bite?  And attack your face?  No?  Oh, yes.
Alright, I'm off for break. No internet for two whole weeks!  How exciting is that? I was hoping for peace and relaxation, but my weeks are quickly being filled up with running here and running there?  Did I mention that I'm tired of being the one to go to people?  No? Well, we'll save that gripe for another day. =)
Merry Christmas people!
Posted by Jessica at 6:47 PM