I mentioned once, briefly, that my sister and I haven’t spoken in over two years.  At least, we haven’t shared more than niceties at holiday dinners and the like.  At my niece’s graduation, she hugged me goodbye and held me with a death grip as she began to sob.  She whispered in my ear that she missed her sister and that she wished we could get together to talk.  Not knowing what to say at that exact moment, I said I’d call her and we’d have coffee or something.

Well, some time went by and I received a random email from her (just a pic of my brother-in-law and a bust he made).  I decided to reply to it and see if she wanted to set up a date to get together. We settled on a date and we met up last weekend at a coffee house.  I purposely picked a neutral place in a neutral town so we could be on impartial territory without interruption.

When I arrived (it took me 10 minutes to park because neither of us realized that there was an apple festival going on that day), we ordered coffee and grabbed a table.  For the first three hours (THREE HOURS), we chatted about her three kids, our dad, family, our moms, etc.  When we realized it was nearing closing time, we decided it was time to face the elephant in the room.

Facing the issue and talking about it was actually the shortest part of our 4+ hour conversation.  It was surprisingly easy to say what we needed to say, explain what needed explanation, apologize and move on.  I’m glad we did it. I’m glad that we have made amends.

Now, we wait and see if sisters can actually be sisters.  Time will tell if we can be friends instead of her being the big sister (she’s 10 years older) who feels responsible for my well-being and wants to mother me and me being the rebellious kid who defies everything she says.  Keeping my fingers crossed.

Making amends is a great thing. It’s freeing to the soul.  If you have things that have gone unsaid with someone in your life, making the effort to forgive and mend the relationship is worth it.   Sometimes it does take time to get over things or come to a place of forgiveness, but it feels mighty good when you reach that point. 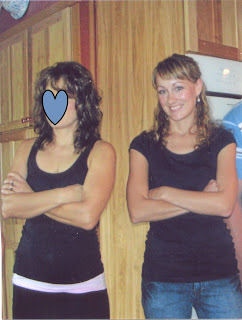 (Unfortunately, I shouldn't show you her face, but this was the best picture together we've ever had and it was unintentional. This was a few years and about 15 lbs ago.)
Posted by Jessica at 3:08 PM