LASIK is a Piece of Cake

That's right people. You heard me. LASIK is a piece of cake!  The whole thing went down like this...

A few days prior to surgery, I received a call reminding me of my appointment.  She confirmed my arrival time of 7:15 and surgery time of 8:30.  She then reminded me to wear absolutely no perfume or anything with a strong, heavy scent as it interferes with the laser.

Friday morning, the day of the surgery, I was up and showering by 5:15 am (Freaking early, I know!).  My ride (mom and her bf) picked me up at 6:15 and we headed out for our 45 minute drive to the doctor's office.  We arrived a few minutes early and waited in the car.  As soon as we went inside, however, they were ready and immediately started processing paperwork.  I had to sign a few consent forms and HIPPA forms and I was on my way.  The nurse took me back and looked at my eyes with two more devices. She explained everything she was doing in detail and how the information she was gathering will help them program the laser to make the most accurate adjustments to my vision.  I believe one a corneal topographer which measures the curvature of the eye and creates a colorful kind of "map" of the cornea. There was also a wavefront analysis machine that sends light waves through the eye to provide an even more precise map of aberrations affecting the vision.  All of that was easy stuff.

The nurse then took me to fill out more paperwork and make payment arrangements.  Something I didn't know until recently is that they have special financing programs for healthcare related procedures.  The doctor that I went thru uses the CareCredit program.  They can set you up on any kind of plan from 0% interest for twelve months up to 13.9% interest for 60 months.  I think this is great because it is usually the cost of the procedure that is a major player in whether or not people decide to have it done.  Not that I am a big proponent of credit in general, mind you. I just think this is a great procedure and, since insurance still finds it optional and won't cover the cost, financing options makes it a viable option for people.

Anyway, we got all that set up and this nurse then took me back to a lovely lady who prepped me for surgery.  She explained everything that was going to happen in regard to medication and eye drops.  She also went over medication, eye drops and protecting my eyes after surgery.  I was given a valium to keep me calm and then a series of eye drops that included numbing drops, an antibiotic drop, and a few other drops that I'm not sure about.

We then went into a room that looked just like any other eye exam room.  The nurse made a name tag for me and stuck it on me shirt upside-down.  She put a little surgical hat thingy over my hair with cotton pads near my ears for collecting excess drops that would run down my cheeks during the procedure and she place surgical coverings over my shoes as well.  Then, we sat and waited for a short while. 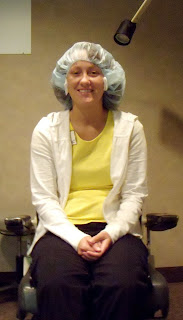 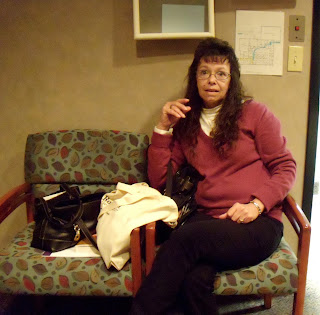 Me & mom (she looks thrilled, no?)
As I was checking out my upside-down name tag and repeating my name over and over, the doctor came in, gave my eyes a quick look, cracked a few jokes (which I thought were pretty darn funny given the fact that the valium had kicked in), and we were on our way.

The room that the surgery was performed in was quite cold. By the time I walked over to the table that you lay on, I was shivering. The nice assistants helped me climb onto the table, lay down and then offered me a blanket (thank heavens). Things proceeded quite quickly from there. They immediately started putting more numbing drops in my eyes. From this point on, I really unaware of what exactly was happening. The doctor and his assistants were very cheerful people. They talk you through everything without giving you too much detail. They even cheer you on and tell you what a great job you are doing. Your job is to lay still on that table and stay focused on the blinking light (orange in my case, but I've heard other say red). They also tell you to keep both eyes open which I found difficult to know if I was doing or not because one eye is being held open with lid holder/retainer type object and the other eye was covered with a dark object. It wasn't until I got home and watched the video of the procedure (yes, I did watch it and I wouldn't recommend it if you are squeamish and/or considering having it done until afterward) that I was able to put two and two together and make sense of everything that had taken place.

First they put this plastic looking ring thing on your eye to hold it steady while the flap is made. I felt some pressure on the eye which would normally have made me panic, but the doctor talked me through it and I reasoned in my head that the pressure isn't going to cause my eye to explode or anything because the doctor is here telling me that this is what is going to happen and it should be happening. Everything goes black for a few seconds. I believe at this point, I was placed under the machine that actually creates the flap. After the flap is made, the ring thing is removed and the procedure is repeated with the other eye. All the while, the doctor and his assistants are talking me through every single step.

After the flap is made on the eye, it is then lifted. At the time, I didn't realize that this is what was happening. The doctor tells you to focus on the light. While he’s lifting the flap with a metal instrument, the assistant kept telling me to keep focused on the light and not to let him take it away. This was a bit difficult in my mind because while he’s lifting the flap, he’s tugging on the eye causing it to move which makes it hard to keep the light in sight. Once the flap is lifted, everything becomes really blurry.

The next part of the process is the laser. It makes some clicking sounds and the assistant calls out how long it will take. 19 seconds…15 seconds….hold on, you’re doing great…13 seconds, 9 seconds…3 seconds…done…great job! My understanding is, the laser detects and follows slight movements that you might make and will pause and readjust if necessary. After the laser finishes, the doctor puts what he called glue (a liquid of some sort) over the cornea and then smoothes the flap back down with a sponge like object. And one eye is complete.

The second eye was just the same. I was a little more anxious during the flap lifting process of the second eye. I think because I was unaware of what was actually taking place and really worried about focusing on the light. Once the doctor lifted the flap, he said that he needed me to settle before proceeding. I immediately was able to do just that and everything proceeded smoothly from there.

I would say the whole procedure lasted less than 20 minutes total for both eyes. The video (which, unfortunately, has a piece cut out in the beginning) lasted all of 11 minutes, 55 seconds. It was painless and the doctor and his assistants made it that much better.

After the procedure, the doctor gave my eyes one last look to make sure there were no foreign objects in my eyes and that the flaps were properly replaced. They made sure I had all of my instructions and eye drops and placed some goggles and sunglasses on me and sent us on our way. 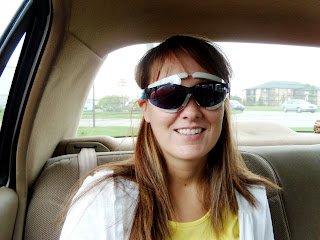 I felt great after the procedure. I was actually able to see right away. My sight was blurry, almost as if someone had smeared Vaseline on my glasses or something, but otherwise, I could actually see a good distance in front of me. On the ride home, I rested my eyes. We stopped for breakfast and I kept my eyes closed for the majority of that time. My eyes were sensitive to the light and a bit scratchy as if I had worn my contacts for a long 15 hour day and taken them out and my eyes were dry.

When I got home, I took the second valium that the doctor’s office had given me, made up a bed on the couch and slept for a good 5-6 hours which is recommended. Keeping your eyes closed as much as possible helps them heal. For my waking hours, it was prescribed one drop of Pred Forte and rewetting drops each hour and one drop of the antibiotic four times a day. By 6 o’clock, I was awake and watching tv from the couch with no problem.

It is amazing! I am still amazed. I would highly recommend discussing LASIK with your eye doctor if you are sick and tired of wearing contacts and/or glasses. The procedure was so easy and the doctor and his staff were absolutely wonderful. I can’t express enough how their attitude and caring demeanor made this experience that much better. I would recommend Rosenbaum Eye & Laser Center one hundred times over to anyone as the staff there truly played a huge part in making this such an easy and amazing experience.


**It may be good to note that this is my experience and my experience only. The details may not be wholly accurate, but are the account from my perspect and from my research on the procedure itself.

Stay tuned for more on the Post-Op appointment.
Posted by Jessica at 12:43 PM